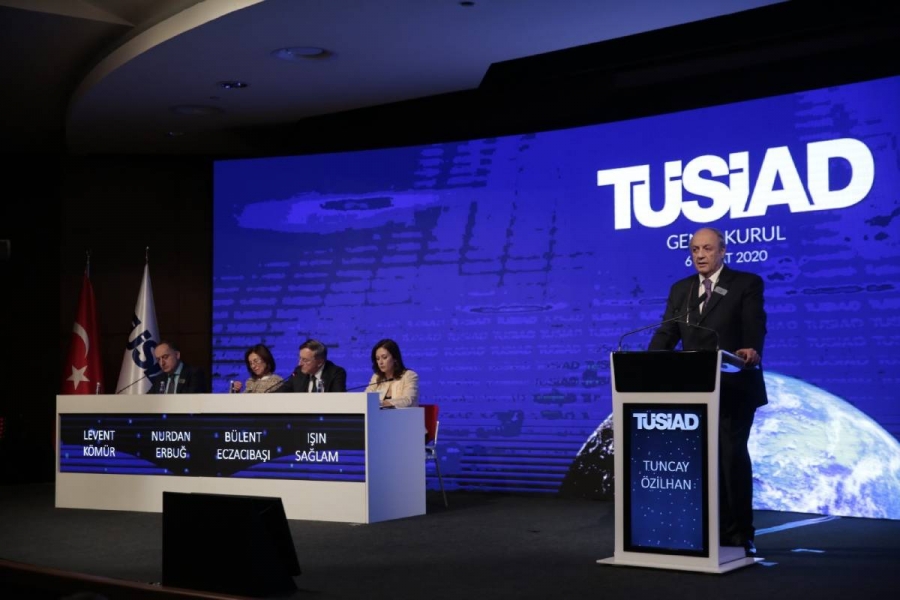 Brief excerpts of his remarks are as follows:

“We are starting the year with encouraging news on the economy. Last year’s contraction in domestic demand has been replaced by a slight recovery this year and consumption is increasing. On the other hand, recovery in sectors that were deeply affected by the crisis, especially construction, may take longer.

“We ended 2019 with a growth rate that was slightly above zero. Although it may not have a major impact on unemployment, we expect higher growth this year. The components of this growth consist of an increase in public expenditures and expansion in the balance sheets of public banks. Simultaneously, with the decrease in interest rates, we see that private banks are also meeting consumer loan demand.

“We also know from past experiences that growth is not sustainable through credit expansion alone. This kind of growth does not increase productivity. It only increases demand, causing the economy to overheat, leading to higher inflation and debt problems. We should closely evaluate long-term implications and avoid making the same mistakes again… The full application of free market principles should not be abandoned.

“I would like to remind you that renewed trust in the economy following the 2001 crisis depended on predictable economic management and the existence of strong, independent institutions.

“We must be aware of the negative effects on the investment environment caused by changes in legislation concerning the real sector and money markets, unanticipated laws that impact the business world, tax policies that undermine the confidence of economic actors and measures that generate concerns over property rights.

“Turkey and the EU need each other greatly. The current situation, in which membership negotiations are de facto frozen, cannot continue forever.

Neither Turkey is just a gatekeeper country for the EU vis-à-vis the refugees, nor the EU is just the most important and largest market for Turkey.

“We must improve our dialogue with the European Union without delay. Turkey’s integration to the European project must be the ultimate destination of its 200-year-long modernization process.

“In the short term, we must update the Customs Union without delay to include sustainable development goals.

“To that end, we must act urgently to address rule of law, judicial independence, democratic norms, human rights, gender equality, and the education system in the 21st century.”

“The rulings of the ECHR and the Constitutional Court must be upheld. The requirements of universal law must be met at every stage of judicial proceedings.”

“The protection of freedoms and fundamental rights, the elimination of economic inequality, the resolution of crises before they escalate into civil wars and humanitarian disasters, and the fight against climate change can be tackled through the broad cooperation of the international community.”

On the relationship with the United States:

“Problems with our most important ally, the United States, should not be left unresolved any longer. There are steps that can be taken on both sides, especially to restore confidence following the attempted coup of July 15, 2016. We have been following the Halkbank case, S-400, and F-35 issues closely and with concern. Missile threats in the region shouldn’t be underestimated, as demonstrated by the recent crisis between Iran and the United States. We hope that allies take constructive steps and that Turkey’s defense requirements are addressed within the alliance and solutions be developed in cooperation.”

“Several studies have indicated that in thirty years, Turkey’s water supplies will drop to the level of a water-poor country. Some of the driest cities in the world will be in our country. We must determine how to mitigate the effects of droughts on water supply, agricultural production, and migration. There must be a coordinated and strategic effort to address these issues.”

“The equal participation of women is necessary for a modern and civilized society. Removing barriers to women’s participation in education, business, and management is a prerequisite for democratic, economic, and social development. Further action is needed on this issue.”

“We have begun the new year slightly more hopeful than previous years. In our country and across the world economic concerns have eased and the expectations of the business world have improved. We expect slightly higher growth this year than in 2019. The improved global economy is positively affecting Turkey as well. Inflation has eased from record levels; the instability of the Turkish Lira has lessened and CDS premiums have dropped. The real economy has recovered somewhat. As interest rates dropped credit growth has increased, first by state banks, followed by private banks. Increased consumer credit is reviving domestic demand. Higher levels of growth will likely lead to higher employment over time.

“However, positive developments in the economy in 2020 are largely due to extraordinary measures taken. If we normalize the use of extraordinary measures to stabilize the economy, predictability will decline. That is why we must return to lasting and healthy market conditions. And we must be cognizant of geopolitical risks that could harm conditions.”

“We must prioritize improving our relationship with the European Union. At the moment, Europe may appear to be burdened by its own problems, seemingly diminished in global politics, however, even now, it remains a point of reference for long-term values and objectives such as democracy, environmental protections, human rights, peace and prosperity. That is why, the EU accession process remains Turkey’s most important issue. Modernizing the Customs Union to include agriculture, public procurement and services is also a priority. The improvement of Turkey – EU relations is good for the EU and for Turkey.”