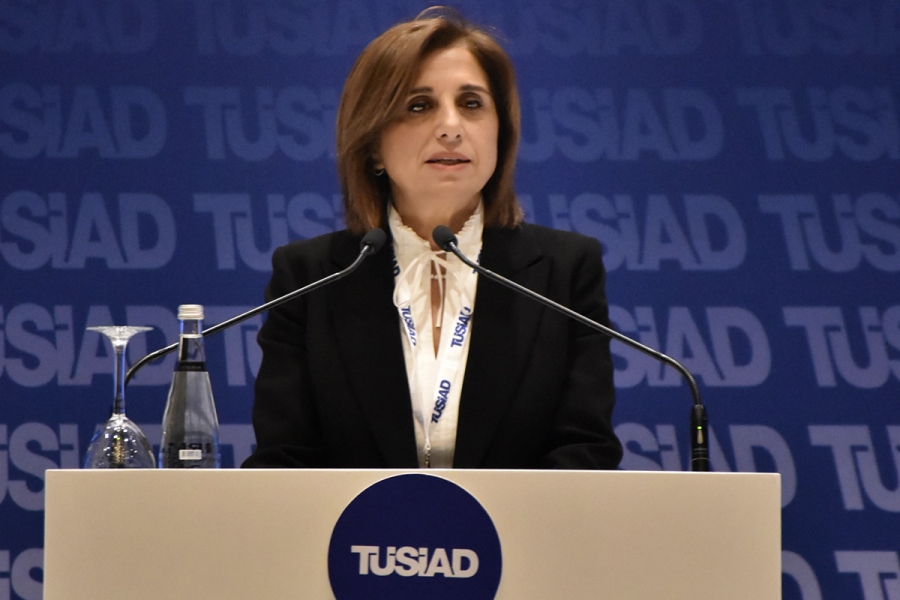 TÜSİAD President Cansen Başaran-Symes delivered opening remarks at the High Advisory Council meeting, which convened this morning in Ankara. The High Advisory Council is a biannual deliberative conference where the business world takes stock of domestic and global political and economic developments, and offers suggestions to policy makers from a business perspective. Prime Minister Binali Yıldırım, Deputy Prime Minister Nurettin Canikli, and Minister of Economy Nihat Zeybekçi were also in attendance. In her remarks, President Başaran-Symes also commemorated the 45th anniversary of the founding of TÜSİAD, as the independent representative organization of the Turkish business world.

I have below short excerpts from her speech in English, for your review:

"Over the last four years, our economy has been performing well below its potential and investments have not been increasing. The 2016 data indicate an economic contraction in the third quarter. The rapid increase in the unemployment rate over the last six months is indicative of the seriousness of the problem. We must seriously consider the implications of having one of the most devalued currencies in the world. The private sector is able to roll over its foreign currency denominated debt, but this cannot be sustained indefinitely."

"If we do not improve the conditions for economic performance, the rule of law, independence of the judiciary, respect for property rights, and increasing confidence, then technical solutions to economic problems will not be sufficient."

On the state of emergency:

"We expect the state of emergency to be lifted, the Parliament to once again resume its proper role, and an end to rule by decree. Turkey needs to normalize. This can only be achieved by once again establishing social consensus, decreasing tensions, and adopting a unifying approach. We mustn't forget that the farther we travel from the normal state of affairs, normalization will be far more difficult."

On fundamental freedoms and governance:

"The most important element of establishing an order based on consensus and mutual understanding is the independence of the judiciary. I would like to reiterate the importance of establishing a meritocracy and non-discriminatory hiring policies in the judiciary and bureaucracy. The lack of confidence in the judiciary in Turkey has deepened and must be addressed thoroughly and quickly. A market economy cannot function without a strong and fair judicial system; without protecting fundamental rights, freedoms, and property rights; without a fair taxation system; or without combating the informal economy."

"Undeniably, Turkey's accession process has taken longer than every other candidate country in Europe and this has been discouraging. On the other hand, approaching this relationship in a manner that ruffles public opinion and provokes our counterparts to overreact is not in Turkey's interests."

"The EU is not merely a reference point for the economy. Rule of law, property rights, separation of powers, the defense of individual liberties, and the right to a trial respectful of human dignity are all common denominators of the EU."

"Turkey must not reverse its determinations on these important issues. We are therefore particularly concerned with the debate on capital punishment. The inability to find common ground with the EU on counter-terrorism has suspended discussions on visa-free travel, a long-time public demand. Turkey - EU relations are once again in a state of mistrust. The European Parliament’s recommendation has created resentment in society. We too believe that the European Parliament's approach is not constructive and may result in unintended consequences."

"We therefore call on the European Council to take steps to overcome the crisis in this relationship when it convenes in two weeks. Ultimately Turkey must contribute to the reconstruction of Europe, even if some of us and some members of the EU political class do not realize it yet."

"It will be a long time before the Middle East will be able to recover, establish order, and finally heal. Sectarian conflicts which use the ideological language of geopolitical conflict will continue to ravage the region for a long time. In fact, we have the antidote. The antidote is secularism. The spiral of blood and violence in the Middle East again shows us the importance of secularism. There may be people who do not want to see this or who reject this for ideological reasons. However, the next era will be a period where this principle will be increasingly prominent. Having won it 90 years ago, we must cherish the principle of secularism."

"Finally, the explosion of terrorism in Turkey reversed a process which had, at one point, spread significant hope throughout society. We should not separate the the fight against terrorism from the Kurdish question which closely relates to unity and peace in our country. Social peace should be reestablished, and we should take measures to heal the tragic outcomes of recent conflicts. We should develop discourse and policies which isolate those who celebrate violence and call upon terrorism."

"We almost paid a steep price for the infiltration of the state by structures like FETÖ, whose closed organizational structure demanded absolute loyalty to their own hierarchy. We should not make the same mistake again. On the other hand, the waves of arrests, which have gone beyond the legitimate fight against terrorist organizations, is a barrier to our country’s return to normalcy."