Transformation triggered by the Russian-Ukrainian war 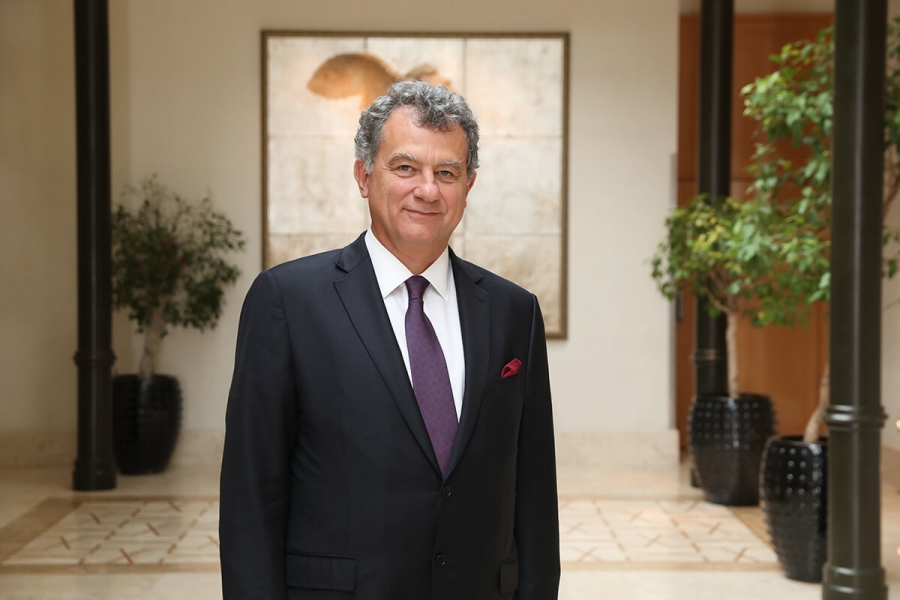 The global recession in 2008 and the refugee crisis in 2015 resulted in a series of cataclysmic changes questioning the fundamentals of the post-Cold War era and the future prospects of the rules-based global system underpinned by liberal democracies and the principles of the free market economy. Populism, protectionism, and the appeasement policies towards autocracies paved the way for transactionalist approach to foreign policy. Indifference in the United States to the global problems and to the international organizations was to be compounded by the EU’s governance difficulties vis-à-vis its integration and a decline in soft power. The discordance among western powers were to underpin the discussions on strategic autonomy, while China and Russia took steps to fill the strategic void with their respective economic and geopolitical focus. As of 2020 the pandemic has only accelerated these dynamics.

In the meantime, Turkey’s international ranking in economic development, human welfare, the rule of law and democratization has worsened. While Turkey’s accession to the EU reached an impasse and the latter merely sought to reduce its relations with Turkey as a transactional buffer zone for refugees, Turkey’s strategic alliance with NATO and the United State faced challenges. As a result, Turkey found herself largely isolated on the foreign policy front. Turkey’s quest to return to normalcy with her regional counterparts heralded an end to years of foreign policy difficulties.

One of the initial signs and symptoms of the reversal of the trends which dominated the second decade of the millennium was the increasing focus on the alignment of democratic norms and global geopolitical divisions following the new administration in the United States, which sought to repair the rift in the transatlantic alliance. On the other hand, the Green Deal only reinvigorated the need to introduce a global resolve to address international issues.

The rift in the transatlantic alliance and domestic issues coupled with the appeasement policies of the EU gave Russia the self-confidence that it needed for geopolitical expansion and made Ukraine a new target for Russia which believed it could rely on strategic support from China. The Russian offensive in Ukraine tightened the ranks of the West and led to its effective comeback on the world stage. This marks a historic watershed.

It is not yet clear whether there will be a rule-based or value-based global order, or a period characterized by uncertainty and the absence of rule-based on hard power. Nevertheless, the process has highlighted the reality of a closely allied strong transatlantic front where the resilience of democracies against autocratic regimes and market economies against state capitalism will be displayed. It has also become evident that Russia will emerge from this process with geopolitical weakening and a loss of status, and its governance model will no longer be a source of inspiration for neighboring states.

Russia's unacceptable invasion attempt has resulted in a large humanitarian tragedy in Ukraine. This attack on Ukraine's territorial integrity and political independence will lead to new risks on the humanitarian front and the order based on international law and the countries in the region.

The new global equation and Turkey

The new global equation revealed the need for Turkey to renew its foreign relations in terms of the transatlantic alliance and the EU harmonization process. We observed during the Ukraine crisis that tensions between the great powers in the international order have limited the pursuit of strategic autonomy, especially within NATO and the EU. Turkey also took steps to solve its problems with the West and with the countries of the region. While the balance of the Montreux Convention with regard to the countries in the region should always be protected, one cannot overlook the contribution of the transatlantic alliance to Turkey's security. Since the onset of the Russian aggression in Ukraine, Turkey has opted to remain loyal to the aforementioned and should target to pursue an even and steady approach to her relations with Russia.

Turkey’s stance both denouncing and refuting the Russian invasion coupled with the diplomacy that it carried out led to the meeting of the Russian and Ukrainian foreign ministers at the Antalya Diplomacy Forum, which was a very important step. The talks in Antalya raised hopes among international circles for a peace and also put Turkey in the spotlight. Even though a concrete outcome has yet to be achieved this meeting contributed invaluably to fostering dialogue between the parties. Similar efforts have to be intensified to bolster diplomatic actions to help resolve the crisis without further loss. The Antalya Diplomacy Forum has, thus, reinforced Turkey`s international reputation and is bound to add further value to Turkey’s future effectiveness in foreign affairs.

The cost of an unbalanced interdependence of Europe and regional countries towards Russia is also on the agenda. So much so that the EU has now introduced comprehensive steps to diversify its resources across multiple areas with a particular focus on energy. At this conjuncture, a priority must be given to strengthening a rule-based economic framework and restructuring the field of defense. The green and digital transformation, energy, the supply chain, and access to raw materials may be challenging areas which have to be addressed in a strong collaborative effort. BusinessEurope, whose members include The Turkish Industry and Business Association (TUSIAD) and the Turkish Confederation of Employer Institutions (TISK) from Turkey, recently published a statement for EU leaders who met in Versailles, France on March 10, clearly pointing to the issues mentioned above. The European business community takes a strong stance on peace and democracy. It attaches importance to strengthening economic resilience and determining a roadmap that will be the basis for the economic stakeholders to pursue in close collaboration.

The Economic Implications of This Process

These foreign policy developments will also have economic ramifications. These will include Turkey`s foreign trade, finance, tourism, expectations, our exports to Europe, the global increase in prices and inflation. It is necessary to evaluate each of these in detail and to take the necessary precautions. The share of tourists coming to Turkey from the region is approximately 25%-30%. We may lose some if not all of them. Likewise, on the foreign trade front, exports are already declining, not only because of the conflict in Ukraine and the Russian invasion, but also due to slow growth in the European economies. These factors point to the important risk of Turkey not being able to access the foreign currency that it needs at a sufficient rate. On the other hand, both these countries are among Turkey`s largest grain suppliers. Here the problem of price and supply suddenly arises. Energy is another highly important item with significant costs attached. The cost of a barrel of oil is up to 110 USD from 70 USD. Every time the price of a barrel of oil increases by 10 USD, we have to pay 5 billion USD in return. With a rough calculation, this will mean an added cost of 35-40 billion USD in increased spending for the Turkish economy. We have yet to comprehend the full and the real cost of Russia`s invasion when it comes to our foreign trade deficit and inflation. We will only really be able to see the effects after March.

The Russian invasion of Ukraine came at a very inopportune time for Turkey with the country already facing an estimate of 55 % inflation and low Central Bank reserves.

We too had anticipated that Turkey`s inflation would near 60% before the summer months. Unfortunately, these latest series of events have only made the outlook worse. There is clear pressure on the value of the local currency which may pose a risk. Furthermore, global markets currently find themselves facing substantial price increases across all commodities and not just wheat, soy, and other agricultural crops. The readjustments made across wages and salaries throughout the year, including the hikes in the minimum wage, have both failed to protect against inflation. This is exactly why we had repeatedly stressed the need to be extremely cautious from the very beginning when inflation was at around the 20% level. At a time when Turkey has not been fully successful in its fight against inflation, it is now facing this crisis. Evidently, one must not lose control in the execution of anti-inflationary measures since reinstating control is bound to be harder when one loses control. Given that there are external shocks it is very unlikely that we shall succeed in lowering inflation to less than 60%.

All of the above, including short-term calculations may put pressure on GDP growth and on investments in particular. Already, we are considering a downward trend in investment growth. It is highly likely that we will not be able to reach the desired output growth this year. From a longer-term perspective, inflation will become rampant, and households will find themselves having to deal with significant decreases in welfare and purchasing power.

Turkey imports an approximately 99% of its natural gas. Russian gas makes up an approximately 45% of Turkey`s gas imports. It is critical to establish an energy transformation that focuses on energy supply security and the climate crisis, as well as to actively contribute to the resilient energy system debates accelerated by the war. Sustainable energy resources gain significant importance in terms of their role to solidify the supply security by resource diversification and to respond environmental concerns. Although the challenging energy agenda triggered by the war seems to overshadow the fight against climate change, we should anticipate tendency towards sustainable energy resources similar to the effect that the pandemic had on the digital and green transformation. We also have a food inflation problem caused by the cost increases and the climate change. Turkey’s grain and oil seeds dependence notably on Russia and Ukraine, directly affects many sectors in the food supply chain. Structural improvements focused on sustainable agriculture are of high importance in terms of inflationary pressure as well as food supply security.

Confidence in the Economy

It will be very hard to restore economic confidence if we fail to resolve the problems surrounding price stability through decisive and continued measures.

Lack of confidence in the country`s economy will ultimately damage Turkey`s risk premium causing increasing reliance on larger foreign exchange reserves and will make access to foreign capital more costly. There are widely accepted rules to manage this kind of vicious circles in the economy. However, Turkey preferred to take different actions rather than to implement these measures. As a result, now finds itself to be one of the most fragile markets when facing extreme external shocks, i.e. the highly undesirable war in Ukraine.

What should our compass be as the global dynamics evolve?

Institutional steps that will confirm Turkey’s direction as the membership to the family of democratic nations and the transatlantic alliance and that will strengthen the will of reform in line with the principles and values of the Turkish Republic as well as our economy, democracy and understanding of sustainability have to be our compass.

This approach will also help Turkey to concentrate on reforms in line with the common priorities of the new order and carry Turkey-EU relations well beyond the refugee equation. We should seize the opportunity to once and for all put an end to any ambiguities surrounding Turkey’s western and democratic identity in NATO and the European Council, where its status was in question alongside Russia’s.

As we stated in our report that was published on October 2021 entitled “Building the future with a new mindset”, if Turkey restructures its institutions and rules to strengthen its economy and democracy, it will gain an advantage in this process. The introduction of the appropriate monetary and fiscal policies will both improve the confidence in the economy as well as the investment climate. An effective public governance model must rely on the separation of powers, checks and balances, rule of law, judicial review, the autonomy of institutions and quality of legislation. Freedom of expression and an environment of free dialogue are indispensable for meeting on a common ground as Turkey seeks to strengthen these elements.