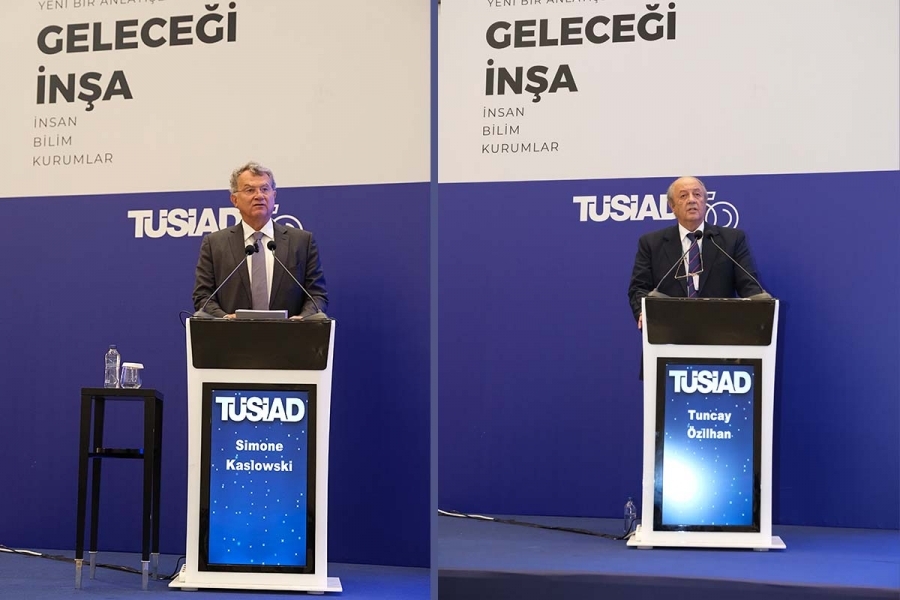 The High Advisory Council of the Turkish Industry and Business Association (TÜSİAD) convened in Istanbul on October 19, 2021.

The High Advisory Council is a biannual deliberative conference where the business world takes stock of domestic and global political and economic developments and offers suggestions to policy makers from a business perspective. Simone Kaslowski, President of the Board of Directors, and Tuncay Özilhan, President of the High Advisory Council, delivered opening remarks at the event. MIT Professor Daron Acemoğlu, author of Why Nations Fail: The Origins of Power, Prosperity, and Poverty and The Narrow Corridor: States, Societies, and the Fate of Liberty delivered a keynote address.

Marking its 50th anniversary, the Turkish Industry and Business Association (TÜSİAD) published a major new report entitled, Building the Future. The report is a road map to building a future by achieving progress in three fundamental areas: “human development and competency,” “science, technology and innovation,” and “institutions and rules.” Growth that is not based on science, technology and innovation cannot be sustained in the long run and cannot improve Turkey’s competitiveness. The quality of political, economic and social institutions and rules is essential for ensuring rule of law, democracy, economic stability, co-existence and co-development. All of these are required to attract investment.

In his opening remarks, President Kaslowski reiterated the Turkish business world’s calls for reforms, strengthening of democratic standards and the rule of law, and reinvigorating the EU accession process. Below are excerpts of his remarks:

On Building the Future…

“The determinants of welfare today are not natural resources, physical capital, or production based on cheap labor. The most important factors in the welfare of societies are intangible resources. We believe that we must urgently prioritize three factors:

The econometric analysis of 105 countries presented in this report show that if we take the necessary steps to improve levels of human development, science and technology, and institutions to OECD averages, our per capita income can be tripled to USD 30,000 in 20 years.

“This is not just about generating wealth. Progress in these three areas would lead to a developed, reputable, just and environmentally friendly Turkey.”

On rules and institutions…

“It is absolutely essential that the state and institutions adhere to the laws, that the independence of the judiciary be maintained, that all rights and freedoms be strengthened to the standards of the European Convention on Human Rights, and that every individual has an opportunity to seek justice. We must no longer be a country where standards of democracy and law are questioned at the European Council.

“A society that is uneducated, that cannot meet the demands of the digital age, cannot build a future. Education is also the most important factor in overcoming inequality. It is essential that we invest in quality education so that we can overcome inequality and develop the capabilities that are necessary for the modern era. It is said that we are in a period of great economic, strategic, and ideological competition. Our responsibility to future generations is to keep the country on par with the rest of the world. The cost of disengagement from the world will be immense and its consequences irreversible.”

“The most important indicator of human development is the role of women in society. Prioritization and protection of women’s rights is the most important dynamic of the future. It is therefore unacceptable for Turkey to have withdrawn from the Istanbul Convention.”

“The bond of the Republic and the precondition for a democratic regime and peaceful society is secularism. Secularism guarantees freedom of religion and conscience. Societies that have not internalized the principle of secularism cannot fully grasp the concept of equal citizenship. And in the absence of an understanding of citizenship, one cannot build and defend a modern and democratic society.”

“Turkey became a candidate for European Union membership at the end 1999. Over the next several years, from 2000 to 2007, Turkey enacted major legislative and Constitutional reforms. These reforms brought Turkey closer to EU norms. Freedoms, judicial independence, individual rights, state-societal relations and the rule of law were strengthened. Turkish society was energized, hopeful, and confident of the future. It is not a coincidence that those years registered the highest level of economic development in 50 years. However, now, our per capita income has declined to pre–2007 levels. The workforce participation rate is stuck around 50-55%. Our youth unemployment rate is around 22%. We rank 117th out of 139 on the Rule of Law Index of the World Justice Project. It is clear that we need a new mindset for development.”

“We were very pleased with the ratification of the Paris Climate Agreement and we must now quickly adapt to its criteria.”

The President of the High Advisory Council Tuncay Özilhan echoed these remarks:

“The latest UN climate report revealed that the Mediterranean basin will be one of the areas most affected by global warming. 60% of Turkey is at risk of desertification. Agricultural practices based on irrigated agriculture, irrigation systems that cause water loss, and misuse of underground and surface water sources compound the water shortage. Water reserves are at historically low levels. With the ratification of the Paris Agreement by the Parliament, Turkey is no longer one of the six remaining countries to have not adopted it. But the urgency and importance of the problems we face demand more. To delay in taking action means that future generations will pay the price of the reckless consumption of natural resources today. This approach is wrong and no longer sustainable.”

“First of all, in order to grow, it is necessary to ensure macroeconomic stability and initiate a process for achieving sustainable growth. The most important steps for this are to strengthen institutions and the rules of the market economy and to establish the independence of regulatory institutions such as the Central Bank.”

On Building the Future…

“[The report that we have prepared] details the goals we set for Turkey’s future and the ways in which we will achieve these goals.

I would especially like to emphasize the importance of preserving the institutions of secularism and democracy, so that we will be able to address our problems in solidarity and build a developed, just, and sustainable Turkey. When we think of the nation, which is comprised of people from different religious, ethnic, and socioeconomic backgrounds, it is only possible to mobilize everyone through democracy and secularism. Democracy and secularism enable our differences to become assets that enrich our cultural and intellectual climate and enable us to advance in science, art and technology. Throughout Turkey’s modernization process, secularism has been the foundation of our democracy. Secularism was the most important principle in the determined steps taken 100 years ago by Atatürk to become a member of the modern world. This principle, which has enabled us to stand upright for 100 years, will be the biggest factor in realizing our aspirations in the next 100 years.

Along these lines, I attach great importance to the following three suggestions:

1. Within the framework of ensuring the rule of law and the independence of the judiciary, the state must be bound by the law in all its activities and effective pursuit of justice must be guaranteed.

2. Strengthening pluralistic and participatory democracy; developing all areas of rights and freedoms for all citizens in accordance with the standards of the European Convention on Human Rights; combating marginalization, discrimination and hate speech in politics;

Video of the event: