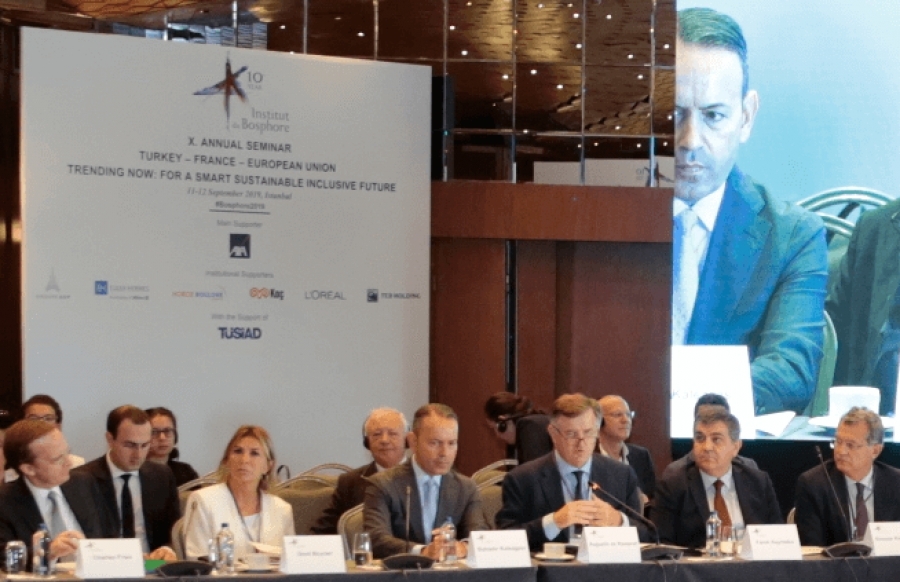 The Seminar was opened with the gala dinner organized under the auspices of France Ambassador to Turkey H.E. Charles Fries at Palais de France in Istanbul with welcome and keynote remarks by Institut du Bosphore President Bahadır Kaleağası and Scientific Committee Co-President N. Ümit Boyner as well as TÜSİAD President Simone Kaslowski. On this occasion, Ekrem İmamoğlu, Mayor of Istanbul shared his assessments on the theme "Smart, Connected and Collaborative City: Where Istanbul Stands in 21st Century Urbanization Strategies?"

The Seminar took place with the participation of honorary guests Faruk Kaymakcı, Deputy Minister of Foreign Affairs, Director for EU Affairs of Turkey and Pierre Moscovici, European Commissioner for Economic and Financial Affairs, Taxation and Customs (2014 - 2019). Both have underlined strategic importance of FranceTurkey but also EU-Turkey relations, and the necessity to implement concrete progress for each parties and they underlined that Institut du Bosphore plays a relevant role on this triangular relation.

Pierre Moscovici, who has been a founding member of Institut du Bosphore Scientific Committee since 2009, said : « I know that relations between the European Union and Turkey have become complicated in recent years. Nevertheless, I remain deeply convinced that there are a number of urgent projects on which Turks, French and Europeans can agree and on which we can move forward together. "During the opening session of the Seminar, Faruk Kaymakcı underlined that « The lack of trust between Turkey and France as well as Turkey and the EU could be overcome by creating a convergence for a strategic Turkish-French relationship and for Turkey’s accession to the EU, a win-win formula for both parties and also beyond."

TÜSİAD President Simone Kaslowski underlined the pioneering role of France for the future of Europe and its relations with Turkey : "France pioneers to solve the global and European problems within the framework of the rules-based multilateral liberal democratic international order. The progressive approach of France in such areas as the management of globalization, the governance of the Euro-zone and climate change exhibits rational but politically difficult solutions. It is inspiring to diagnose correctly the roots of the problems of globalization and meet the legitimate demands of the Yellow Vests, who are the typical symptom of these problems without recourse to easy way of protectionism or populism. France is one of the critical countries with regard to the Turkey’s accession process to the EU. One of the priorities of President Macron’s is to renew the EU. We expect he will see the bilateral damage if the EU-Turkey relations would be relegated to an inferior 2 level. The exclusionary approaches that put an end to accession negotiations of Turkey contradict his broad vision for the European future. Despite the difficulties, the European Union remains the most developed supranational political structure which has most the potential to solve today's complex problems. For Turkey, EU membership has a strategic importance. We need to revitalize our relations with the European Union while maintaining the membership perspective."

During the gala dinner, N. Ümit Boyner, Member of Board of Directors of Boyner Group, Vice President, TUSIAD High Advisory Council, underlined that "With the mismanagement of globalization; the triangle of economic stagnation, security concerns and identity politics generates fertile ground for the rise of the radical populism and the politics of fear. With the co-existence of anxious majorities and alienated minorities, populism leads to misguided outlets, rather than addressing the roots of the problem. The gap between global nature of the economies and national nature of politics needs to be harmonized to solve these problems. With this gap remaining intact, populism is a misguided outlet rather than a remedy to solve the problem. The use of neomercantilist protectionism has a boomerang effect with the retaliatory measures and the escalation of trade wars and cyberwarfare. The deficiencies of the liberal system and globalization can and should only be reformed within its own principles and parameters, not by undoing their gains and switching to the statecapitalist protectionism of illiberal autocracies. “Taking back control” or sovereignty in the age of globalized economies and supply chains is an illusion."

Delivering his opening remarks of the Seminar, Augustin de Romanet, Chairman & CEO, Groupe ADP mentioned that "We are living in a paradoxical situation where global challenges are globalizing, and responses are fragmenting. We should support initiatives for dialogue, cooperation and exchange, just like the relations between France and Turkey must be."

The two sessions, respectively entitled « Continue watching: Liberal Order and Political Landscape in Turkey and in the EU» and « New releases: Technological Development and Innovation Ecosystems as Drivers of a New Type of International Collaboration » enabled the participants to exchange in a forward-looking reflection on the various cooperation perspectives for strengthening EU – Turkey relations as well as the Turkish-French bilateral cooperation. The program is available online: www.institut-bosphore.org

Bahadır Kaleağası, President of Institut du Bosphore concluded the two days debates with the following words: "In the age of technological revolution of 21st century, the transformation accelerates in all fields and from economy to social life and democracy. On its 10th anniversary, Institut du Bosphore, as a platform for permanent, free and objective dialogue and debate, continues to work to think upon Turkey’s European integration process under this perspective."

This annual meeting hosts more than one hundred personalities from Turkey, France et Europe’s political, intellectual and business spheres. Among political figures who participated in the 2019 seminar: MEPs Bernard Guetta, Member of the Committee on Foreign Affairs and Marie-Pierre Vedrenne, Vice-chair of the Committee on International Trade at European Parliament as well as Laurence Dumont and Jean-Luc Reitzer, both Vice-President of France-Turkey Inter-parliamentary Friendship Group and Member of the Foreign Affairs Committee at French National Assembly, and Ismaël Emelien, Co-founder of En Marche!, French President Emmanuel Macron’s Special Advisor for Strategy and Communication (2017-2019).

Focus on economic and cultural relations

After the Seminar, Institut du Bosphore Business Network meeting gathered together private sector representatives and economists to discuss on Business climate in Turkey and on the development of economic and trade relations with France.

The cultural relations were also highlighted with a preview of the 2019 Istanbul Biennial The Seventh Continent, organised by the Istanbul Foundation for Culture and Arts and sponsored by Koç Holding, and curated by the French art historian, curator and scholar, Nicolas Bourriaud.

Bosphorus Seminar in the media

New publications of the Institute

The Seminar was also the occasion for the launch of a new article series of Institut du Bosphore that will be published on the themes: Intertwining Perspectives On The International Liberal World Order, The Future Of Europe And Turkey – EU Relations, Turkey – France Bilateral Relations. The below mentioned articles belong to the first edition.

Aspirations, illusions, harsh realities and the future of the European Union’s strategic standing

The End of an Enduring Alliance? Turkey and the West

Institut du Bosphore, the first think tank entirely dedicated to the Franco-Turkish bilateral relationship, created in 2009 at the initiative of TÜSİAD (Turkish Industry & Business Association), aims to renew and strengthen the dialogue between Turkey and its European partners.

contact : Didem Bora, Directrice, Institut du Bosphore (This email address is being protected from spambots. You need JavaScript enabled to view it.)